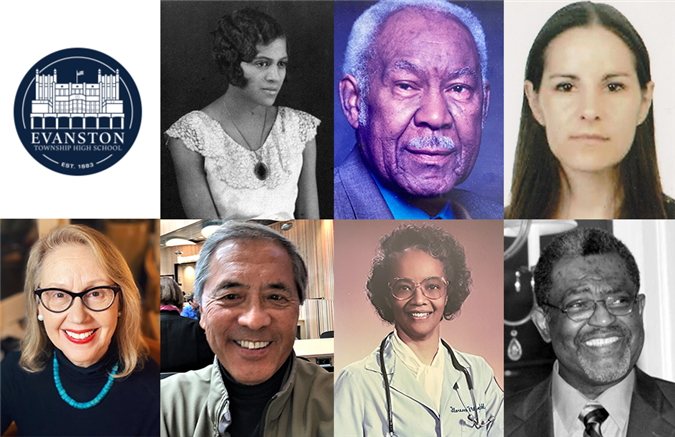 Helen Cromer Cooper (‘24, posthumous) was one of the first African American women to attend Northwestern University, where she studied to become a social worker. She went on to be the first woman of color appointed Assistant Regional Representative of the Bureau of Public Assistance at the U.S. Department of Health, Education, and Welfare.

Dr. Alvin Keith (‘41, posthumous) attended Xavier University in New Orleans but returned home and entered Loyola University Chicago as a pre-med major. During World War II, he joined the Tuskegee Airmen forming the 477th Bombardment Squadron. After the war, Dr. Keith graduated from the Illinois College of Podiatry, opened his own office, and was a mainstay of service in the Evanston community.

Karly Kupferberg (‘03) has been working in countries around the world experiencing war and is currently in Ukraine. She is trained to clear communities from explosive threats and help them rebuild. She received her International Mine Action Standards, Explosive Ordnance Disposal (Level 3) certification and hopes to inspire more women to become deminers and join global peacekeeping operations.

Ellen Rosenblum (‘68) is the first woman elected as Attorney General of the state of Oregon, where she is now serving her third term. A longtime advocate for women in the legal profession, she has also fought for reproductive freedom, environmental justice, and civil rights. She fights for the most vulnerable people in her state and around the country, and her work has been recognized by the American Bar Association.

Austin Tao (‘61) is a leading landscape architect in the United States and around the world, becoming a National Trustee and Fellow of the American Society of Landscape Architects. He has also served as the National President of the Organization of Chinese Americans, an advocacy group dedicated to advancing the social, political and economic well-being of Asian Americans and Pacific Islanders.

Dr. Florence Winfield (‘44, posthumous) earned her MD at the University of Wisconsin and built a practice in Evanston, where she supported the Evanston Community Hospital. She was later approached by Children’s Memorial Hospital to help provide services to the underserved, black community in Chicago, which led to the creation of the Winfield Moody Clinic in the Cabrini-Green neighborhood.

Mike Wynn (‘65, posthumous) played football professionally for the Oakland Raiders and New England Patriots. He later returned to ETHS, where he served in numerous positions, including football coach, driver’s education instructor, and Dean of Students. He also founded the Justin Wynn Fund in 1987 in memory of his son who died in a swimming accident. The organization has since helped hundreds of youth develop into leaders of their communities.