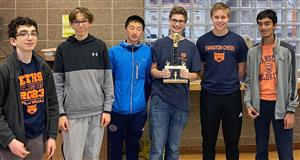 The ETHS Varsity Chess team defeated many of the top high school teams in Illinois, finishing the competition in fourth place. Rohil Bose, Alex Fogel, Meris Goldfarb, and Alan Wang were the team’s top scorers, however, Elijah Platnick's win on Board 1 led the team to victory in the final match.