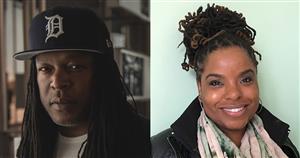 “Letters to the Sons of Society: A Father's Invitation to Love, Honesty, and Freedom,” a conversation between Shaka Senghor and Lolly Bowean, will be held on Thursday, January 20, beginning at 7:00pm via Zoom. The event is free and open to the public, suitable for ages 12 and up. Registration is required.

Shaka Senghor has lived the life of two fathers. With his first son, Jay, born shortly after Senghor was incarcerated for second-degree murder, he experienced the regret of his own mistakes and the disconnection caused by a society that sees Black lives as disposable. With his second, Sekou, born after Senghor's release, he has experienced healing, transformation, intimacy, and the possibilities of a world where men and boys can openly show one another affection, support, and love.

In Letters to the Sons of Society: A Father's Invitation to Love, Honesty, and Freedom, a collection of beautifully written letters to Jay and Sekou, Senghor traces his journey as a Black man in America and unpacks the toxic and misguided messages about masculinity, mental health, love, and success that boys learn from an early age. He issues a passionate call to all fathers and sons to cultivate positive relationships with other men, seek healing, tend to mental health, grow from pain, and rewrite the story that has been told about them.

Senghor is a lecturer at universities, a leading voice on criminal justice reform, and the New York Times bestselling author of Writing My Wrongs: Life, Death, and Redemption in an American Prison.

Senghor will be in conversation with Lolly Bowean, a writer, an award-winning journalist, and community storyteller. Bowean currently manages the Journalism portfolio with the Creativity and Free Expression team at the Ford Foundation.

The event will be recorded and available later on FAN’s website and YouTube channel. A bonus after-hours event is also available to webinar attendees. For more information, visit www.familyactionnetwork.net.