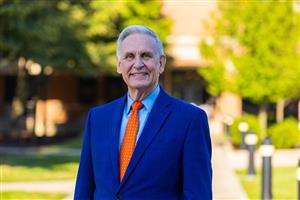 EVANSTON, IL -- Eric Witherspoon, superintendent of Evanston Township High School District 202 since July 2006, has announced that he will retire at the end of the 2021-22 school year. The district’s Board of Education will approve the notice of retirement at the September 13, 2021 meeting. Watch Dr. Witherspoon's video message.

“ETHS and the Evanston community have been so fortunate to have Dr. Witherspoon as our superintendent for the past 16 years,” said Pat Savage-Williams, president of the ETHS District 202 Board. “His leadership, his compassion, and his positive impact on ETHS have set the tone for this amazing school district. It has been an honor for the Board of Education to work alongside Dr. Witherspoon. He is incredibly dedicated to our students, staff, and community.”

With equity and anti-racism as the hallmarks and foundation of his superintendency, Witherspoon led the detracking and restructuring of the freshman experience and the acclaimed earned honors model that increased rigor and expectations for all ETHS students. Academic performance increased and enrollment in Advanced Placement courses grew, particularly among students of color. Over the years, the earned honors model which benefits all students has been greatly expanded to most courses throughout the school.

With all students in Illinois taking the ACT until recently, ACT results at ETHS reached the highest in the history of ETHS for nine consecutive years. With a focus on career and college readiness, opportunities for students have expanded to prepare them for life after high school. ETHS has also invested in alternative school and therapeutic day school programs to increase student success in supportive settings while reducing obstacles to progress.

With an increase in academic achievement and graduation rate under Witherspoon’s leadership, ETHS has been consistently recognized by U.S. News and World Reports and The Washington Post as ranking in the top 2-3% of all ranked high schools in the nation. The College Board also named ETHS one of the eight Inspiration Schools in America.

The implementation of strategies led by Witherspoon have helped ensure that ETHS District 202 continues to demonstrate growth in key areas: curricula and academic supports, programs and services that include social/emotional supports, partnerships and collaborations with Northwestern University and Evanston Cradle to Career, and Joint Achievement Report with District 65.

Leading with transparency and honesty

A long-time proponent of equity in education, Witherspoon has worked alongside ETHS staff and board members to develop and implement the district’s equity initiatives. Professional development and training for staff are developed through an equity lens to facilitate conversations about race and identity while re-examining policies, procedures, and practices.

Building on the groundwork of student-centered education, Witherspoon continued to lead the district through a global pandemic. Focusing on the health and safety of the ETHS community in a rapidly changing environment, he remained vigilant to offer high quality remote instruction during one of the most challenging times in the district’s history. Overseeing new and innovative ways to educate students, Witherspoon helped ensure that the stakeholders were informed as the district prioritized the safe reopening of the school.

ETHS has reached significant milestones with WItherspoon’s careful attention and decision-making, providing consistent fiscal strength and responsibility during challenging economic times in Illinois. The district has achieved a balanced budget every year since Witherspoon came to ETHS, annually winning the top national budget and accounting awards and receiving the coveted AAA bond rating.

Striking the balance between preserving the historic architecture of ETHS and creating a 21st-Century learning environment, Witherspoon ensured that facility upgrades and long-term strategic initiatives would benefit students for decades to come. By careful fiscal planning and partnering with the efforts of the ETHS Foundation and Alumni Association, he has focused on students having access to unprecedented resources and facility upgrades. These include a Geometry in Construction site, science research center, literacy lab, science labs, planetarium, wellness center, athletics and physical education spaces, Central Library, entrepreneurship center, the Hub student success center, labs for auto technology, advanced manufacturing, and engineering, and auditorium upgrades, along with increased energy efficiency, and other improvements. Developments in technology and communications (Google for Education Reference District, 1:1 Digital Initiative, mobile app, branding and signage, and school website) have also made ETHS a model school district. 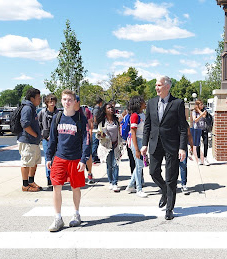 Witherspoon is widely known for being student-centered. A highly visible leader at ETHS, Witherspoon regularly connects with students, including at the start and end of the school day. Most days, he speaks with students in cafeterias and attends school events. With a steadfast focus on serving the needs of all students, Witherspoon also works with community leaders and local organizations to increase community involvement and mobilize efforts that amplify student voice.

“It’s a great day to be a Wildkit” is more than a saying for Witherspoon; he embraces full heartedly the special meaning of being part of the ETHS community. In addition to sharing a brief video message with the staff, Witherspoon sent a video message to thank students, families, and the community for all of their support throughout his years at ETHS.

Witherspoon will continue to serve as the ETHS District 202 superintendent through June 2022, working to transition leadership after the Board of Education selects a successor this fall. He plans to continue to reside in Evanston after retirement and take an active role in serving his beloved community.